What’s wrong with this picture? Bad Air in Hong Kong 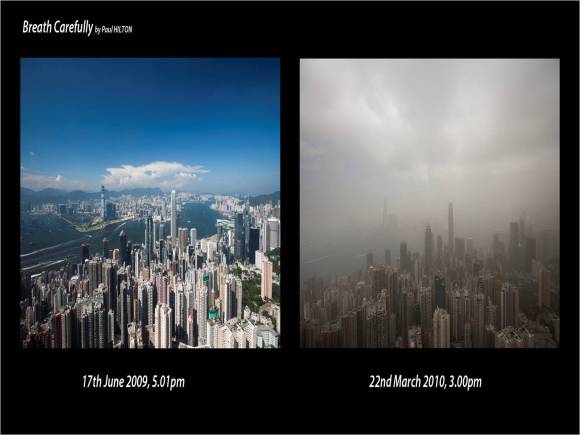 For those of us living in Hong Kong – The great photos from Paul Hilton I came across again recently illustrate our sad reality. Occasionally, we see blue skies (like today) but more often than not, the photo on the right reflects what we must live with.

Doctors, advocates for children, for the elderly, politicians, business leaders, NGOs have called for action to clean the damaging air. Local think tanks and academics have shown in careful research that most of the time, the polluted air that affects us come not from factories in southern China but from local sources  – buses, trucks, cars, shipping.

Blueprints for clear and immediate action have been handed to government officials.

The Hong Kong government, however, refuses to act, engaging instead in years of study, public consultation and more internal discussion ahead of something as simple as a promised revision of the city’s Air Quality Objectives, established in 1987.

Maersk, the shipping line, announced last week that in the absence of government action to regulate, its ships would unilaterally start using low-sulphur fuel when coming into port in Hong Kong. For years, the shipping industry has asked the government to regulate. Reasonably, they want a level playing field.

There are sad whispers from government halls that this is an issue only the gweillo, the foreign population, cares about. How insulting to the local population – do government officials really believe Chinese don’t care to protect their health?

What is the reason behind government inaction? We are an educated and wealthy society with a government surplus to spend on the public’s behalf. What could be more important than acting to protect our health?

2 responses to What’s wrong with this picture? Bad Air in Hong Kong