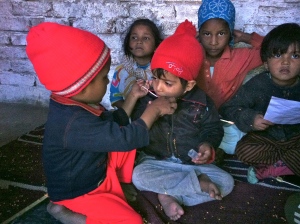 I recently spent some days in Mumbai with our team there who are working to establish what will be a critical collaborative voice to help combat child sexual abuse (CSA)  in India.

Aarambh will be in first order a National Resource Centre on child sex abuse and, at the same time, will have the capacity to access legal and other support for victims, as well as provide training to communities, relevant government bodies and NGOs on the topic. The Resource Centre, which will gather education materials, promote awareness and best practice, is scheduled for launch in November.

Aarambh is a joint initiative of the ADM Capital Foundation and Mumbai partner, Prerana, which for two decades has provided support to the children of sex workers and is led by Priti Patkar, who is a respected authority in the field.

We are extremely excited to have Prerana as our partner in building Aarambh in a country where a 2007 government-sponsored study that included 12,500 interviews with children in 13 Indian states said 53 percent reported having been sexually abused in some way. Only three percent of the cases were reported to the police.

Last year, a Human Rights Watch report said the government’s response to CSA has fallen short, both in protecting children and in treating victims.  At the time the HRW report was released, Meenakshi Ganguly, the director of Human Rights Watch in South Asia, said in a statement: “Children who bravely complain of sexual abuse are often dismissed or ignored by the police, medical staff and other authorities.”

The government did not dispute HRW charges that India’s child protection system was flawed. The head of one government agency was quoted as saying at a news briefing that frequently police or court officials didn’t accept that rape or incest had occurred.

Besides Prerana’s deep knowledge of CSA in India, Aarambh builds on ADMCF’s long partnership with Philippines-based Stairway Foundation, which has produced excellent training materials and animated films on such topics as incest, trafficking and sexual abuse more generally.

ADMCF helped Stairway foundation translate the films and other materials into several Thai languages and facilitated trainings of NGOs and other groups there before turning most recently to India, where education, discussion and action on the topic is equally critical. The moment for change seems particularly right given India’s two-year old law on CSA known by the acronym POCSO. There exists confusion related to how to implement that law nationwide.

Uma Subramanian, who has led ADMCF in India over the past few years, is leading Aarambh with Prerana. She is building a team and the network of partners that will form the initiative. Indeed, the vision for Aarambh is that it is a collaborative effort, bringing together organizations working on the topic of child sex abuse from many perspectives, beginning with the Mumbai Child Safety Network.

In terms of helping to implement the law, for example, there ought to be specific medical units within hospitals set up to receive children who have been victims of abuse. There also needs to be training and special provision within the courts and police force nationally. At the same time, there will be space to comment on aspects of the law to make sure it functions effectively to protect children.

Some of this work is ongoing regionally, but the Aarambh National Resource Centre hopefully will help to spread best practice throughout the country.