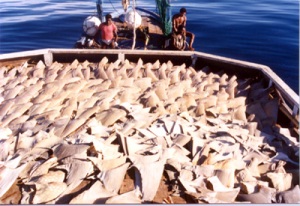 I thought that since we were in the midst of Chinese New Year this might be the time to write about shark fin soup and its growing consumption in Asia. Perhaps not understood by many, is that this has dramatic consequences for our oceans, which are already depleted by overfishing.

Over the Lunar New Year, consumption explodes of the pretty tasteless soup, which is made by simmering the fins for up to eight hours with mushrooms, fine dried ham, other seafood in a base of clear chicken stock or water.

Traditionally served at Chinese weddings and other special-occasion banquets, shark fin has surged in popularity as China has become more prosperous, with more than 800,000 metric tons of fin consumed every year. That’s triple the quantity of 50 years ago.

Chinese believe that shark fin soup, which can cost as much as US$200 a bowl, promotes health and prosperity, reflecting the status of the hosts. And whereas in years gone by, families would gather to prepare a simple meal together, for an increasingly affluent population the Lunar New Year has become a time to splurge on expensive and not necessarily tasty gourmet cuisine at restaurants and hotels.

Turtles, abalone, shark fin and birds nest are top of the list of foods families feel compelled to order for their exotic qualities and expense, rather than necessarily for their taste.

The sad reality is, however, that 20 percent of shark species are now threatened, with  an estimated 200,000 killed daily – millions every month – many for their fins alone. Some sharks, like the hammerhead and the great white, have been reduced by upwards of 70 percent in the last 15 years, while others, like the silky white tip, have disappeared from some oceans entirely.

Part of the problem, is the shocking practice of finning, which has been banned by upwards of 60 countries since 2004. Since sharks are large creatures and the meat itself is not particularly valuable, to save space on their boats, fishermen often slice the fins off the live shark on the high seas, tossing the body back into the ocean, where the shark in effect drowns.

This practice is fueled by huge demand. A “set” of dorsal and pectoral fins can fetch as much as $100 for fishermen, and then $700 a kilogram in Hong Kong’s dried seafood stores, the hub of the world’s trade.

Beyond the huge waste in a world where many are hungry and the  cruelty of finning lies the reality that these wonderful and important creatures are disappearing from our oceans yet we can’t live without them.

Sharks and their direct predecessors have been swimming in the world’s oceans for well over 300 million years – long before dinosaurs walked the Earth. The fact that sharks have survived for so long without changing very much is a real tribute to the effectiveness of their anatomy.

According to the Oceanic Research Group, recent studies have shown that sharks are quite sophisticated. Most sharks have an incredible sense of smell. These sharks can detect one drop of blood dissolved in as much as one million gallons of water. Many sharks can detect the extremely minute electrical currents generated by the muscles of swimming fish. Some sharks can sense at a great distance the tiny pressure variations generated by an injured fish struggling to swim. Contrary to popular opinion, most sharks have excellent low light vision, thanks to a mirror located behind the retina. This mirror reflects light through the retina a second time. A shark may have many rows of teeth. When an old tooth breaks or becomes too dull, a new one rotates into place. Are these the marks of an unsophisticated creature?

Perhaps also not well known, is that sharks come in incredible varieties. The largest fish in the ocean is, in fact, the whale shark, reaching about 60 feet in length. The smallest known shark is only a few inches long when fully grown. While many sharks do have conspicuous teeth, many of these animals eat only small invertebrates. Other sharks have no teeth at all, feeding by straining plankton from the water much like the balleen whales do.

Often we hear that sharks are dangerous creatures, perhaps fueled by the film Jaws.  The fact is, you are much more likely to be hit by a car or even struck by lightning than you are to be attacked by a shark and there are on average only about four fatal shark attacks a year. In reality, sharks are no more dangerous to people than any other large predators like tigers or lions. Why do we label sharks killers, while we consider lions majestic, magnificent?

And perhaps most importantly, sharks are essential to the ocean ecosystem. Like most top predators, sharks feed on the sick and weak, thereby keeping the schools of fish healthy. Lions and tigers serve the same role in their ecosystems, removing the weaker animals from the herds, and keeping the gene pool strong.

In areas where sharks are significantly depleted, fishermen report serious declines in shellfish populations as other fish species feed on them undeterred.

Despite the threats sharks face, there is not enough action worldwide to protect these majestic creatures. Only three species of shark –  great white, basking and whale – are currently listed under Appendix II under the Convention on the International Trade of Endangered Species (CITES), meaning that trade in their parts is regulated.

Other species – including hammerheads, oceanic whitetip, dusky and sandbar sharks – desperately need the same protection. The U.S. is currently considering submitting proposals to add additional species to the list of sharks protected by CITES.

Among other action to conserve sharks, in Europe, the Shark Alliance – a coalition of NGOs – is working with governments there on regulation. In Hong Kong, Bloom Association (http://bit.ly/cFs4OQ) and WWF are working together to generate market, trade and cultural research that will inform a campaign targeting hotels, restaurants and consumers.

Joint and swift action is needed to protect sharks!